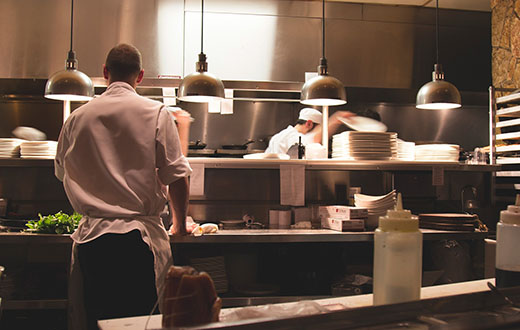 Commercial applications for CALCLEAR include:

Using the CALCLEAR system, it is now possible to economically treat the entire water supply to the kitchen, effectively de-scaling all the equipment connected to it. This eliminates the need for de-scaling chemicals and rapidly reduces maintenance and repair costs.

In-line filters are cleaned out and do need replacing as often, if at all. A large in-flight catering operation, which uses CALCLEAR to treat its entire water supply, achieved immediate cost savings by changing the detergent for their tunnel washers, to one which did not contain the de-scaling chemicals.

This resulted in huge savings in chemical costs which paid back cost of the CALCLEAR units within two months. These savings in maintenance, downtime, servicing and chemical costs are typical of what can be expected throughout industry and agriculture. Steam oven elements will be progressively de-scaled and remain scale-free (provided the flushing mechanism is operated daily).

All other appliances such as water heaters, dishwashers, cappuccino machines, taps and pipes will remain scale-free prolonging their service life and reducing maintenance costs and eliminating acid de-scaling

Note: CALCLEAR units are compact and do not take up the space that other filters and water conditioners use.

These industries benefit from the combined de-scaling and water softening abilities of the CALCLEAR system.

Boilers will be continuously de-scaled thus eliminating the need for chemical de-scaling.

The treated flow progressively breaks down the bonds of the existing scale deposits and takes them back into the flow to be flushed away. However, the bonds between the scale and the surfaces of the pipes and the heating elements are usually the first to be broken down.

This means that the scale can detach itself in lumps during the initial three months of de-scaling and although these will be progressively broken down, they can cause blockages or a slowing of the flow in some circumstances.

Blockages are rare and easily avoided by taking the following precautions.

Scale drops to the bottom of the hot water service tank below the heating element where the cold inlet flow progressively dissolves the removed scale.

Heating times are reduced and the thermostat setting can be lowered to save energy costs.

No blockages occur but in some instances, scale being removed from the safety valve at the top of the hot water service tank may cause it to release some water until the scale particles have been flushed away.

Operating this valve manually about once a week for a few seconds will prevent this problem occurring. No other maintenance is required.

Scale on elements and steam chamber walls, softens and falls off. Scale on control valves and pipes is removed. Oven linings become easier to clean. Acid treatment no longer is required.

Important Note: Steam ovens use comparatively small amounts of water, which the CALCLEAR system uses both to de-scale and flush out the removed particles. It is essential that the flushing mechanism (if not automatic) is operated at the beginning and end of each day to prevent removed and softened scale from blocking the drain holes of the steam chambers.

Scale will progressively be removed from the elements and internal pipework of coffee/cappuccino machines.

The hot water outlets will periodically (every two weeks) have to be dismantled and the small scale particles rinsed out under a tap.

Scale removed from other types of boiling vessels will be progressively broken down and should not cause any operational problems.

These usually have mesh strainers on the cold water inlet to the appliance.

These will catch particles of scale that have broken away from the water pipe and may eventually cause a slowing or blockage of the water supply to the appliance concerned.

Rinsing out these mesh strainers periodically (every two weeks) during the first three months will eliminate this possibility.

This equipment will be progressively de-scaled wherever it is in contact with the ionised water flow.

At the points where evaporation is occurring, little de-scaling will occur, however hard scale will be progressively replaced with soft scale which can easily be hosed away.

The particle size of the ionised flow is below that required for most fungal and algae formation and these tend to be eliminated along with the limescale.

The CALCLEAR system has no adverse effect on any existing filter systems, and the de-scaling process is not effected by them. These in-line filters will gradually be de-scaled by the ionised water which reduces particle sizes below 4 microns. This will effectively prolong the life of the existing barrier or scale inhibiting filters, which from an operational point of view, become surplus to requirements.

Filters used for taste or direct hygiene purposes should be left in place where their efficiency and service life will be enhanced by the ionised flow.

Water softeners need no longer be regenerated with salt but may be left in place during the de-scaling period whilst the CALCLEAR system de-scales them and removes the sodium deposits left as a by product of there operation. Thereafter they can either be removed, sold or left in place, provided they are not restricting the water flow.

Ionised water has several benefits ranging from better lathering of soaps and shampoos, to alleviation of itchy skin/scalp whilst progressively removing shower mould and inhibiting its return (The sub 4 micron particle size is below that required for mould formation).

Ceramic and stainless steel surfaces brighten up as the residue formerly left by the calcium crystals are removed. Examination of the toilet flushing cistern will show the scale being broken down below the water level, with the dislodged particles collecting at the bottom of the cistern. These particles are gradually broken down and flushed away.

During the initial de-scaling period existing barrier filters may trap scale dislodged from the incoming water supply and these should be periodically rinsed out as with the mesh strainers mentioned earlier. It must be emphasised that these dislodged scale particles only occur during the initial de-scaling period on existing water systems in hard water areas and would not apply to new plumbing systems or ones that are currently being commissioned.

By observing these simple precautions all water consuming equipment will be returned to almost original operating condition, resulting in energy savings, prolonged equipment life and a large reduction in scale related equipment malfunctions.

We fitted the CALCLEAR Pre wound pipe, filled the scaled up heater with CALCLEAR treated water and left it to sit over the weekend. On Monday we fired up the heaters, fitted a stocking over the outlet and turned on the tap. CALCLEAR treated water passed through the scaled up heater, the scale was dislodged and shot out into the stocking filter thus removing the buildup on the heat exchangers.

The outcome was that the heat exchangers were cleaned up and didn’t need replacing.

Phil Best in Bunbury who is the President of the Master Plumbers Association was very impressed with the CACLEAR he put on. After a few weeks the boiler showed a great reduction in scale build up. Normally he had to remove 5 wheelbarrows of scale from this abattoir boiler.

Post Script – 2006 Yearly Boiler inspection showed no scale – opened it up , had a look and closed it again !!!

Perhaps the following may be of assistance.

Question.
Whilst many areas of Australia have lived with hard water, increasing levels of Sodium are becoming our greatest concern, particularly the matter of corrosion in metal heating tanks including Stainless Steel. How can CALCLEAR assist in such situations?

Answer.
It is quite correct that hard water has, for many years simply been accepted as part of life, Adelaide is a classic example, surprisingly a very small percentage of businesses and an even smaller percentage of domestic homes have any form of water treatment.

Approx. seven years ago, in Adelaide, I was confronted by a dramatic increase in failures of Stainless steel booster tanks fitted to commercial dishwashing and glasswashing machines, tanks were lasting only 12 – 16 months!! Chemical analysis revealed high levels of Sodium within the scale at the point of failure.

Considering we had a number of unaffected machines in establishments fitted with base exchange water softeners with the potential to discharge high levels of Sodium into the water, clearly Sodium itself was not the cause. Further investigations ps.